Solange - A Seat At The Table 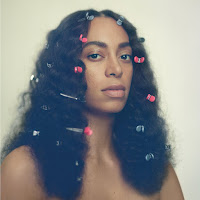 It takes years of hard work in order to become an artist. But it only takes a bunch of days to create a milestone. And if you think about it, it always happens when least expected. Think about Adele's 21, Lauryn's The Miseducation of and Alanis' Jagged Little Pill. Zero anticipation. Nobody really cared, until the day of their release.

A Seat At The Table is Solange's third album. Few people listened to the debut. Some more people noticed the second one. And then, there were none. Four years later, she recorded the addictive True EP and she instantly became a hipster. And now, another four years later, she releases one of the most consistent and remarkable albums of 2016. Is this a Lemonade coincidence or a personal statement?

Solange is a smart girl. While her sister runs the world, she has decided to be something completely different: an anti-star. Solange is a real person. You can find her in New Orleans with her husband, creating music, drinking old-fashioned cocktails, biking and collecting vintage dresses. She doesn't care about attention, world tours, Instagram records or winning a Grammy. Well, we can check this off the list, even if it's too early for next year's nominations.

ASATT is a smooth and mature celebration of being a black woman. Though I can't stop thinking about the obvious similarities with Erykah's Baduizm or even Jill's Words and Sounds, Solange takes her version of feminism a step further. She derives her inspiration from her family, her hometown, her own marriage, her sister, her personal experience. But don't ever think this collection of songs is about girl power. It's about black women being devalued, black women being great artists, black women being future American Presidents. Her vision is moving and emotional, but never arrogant or cocky.

Her first two videos, Don't Touch My Hair and Cranes In The Sky, made an instant impact the day they were released. With flawless, minimal production (God bless Raphael Saadiq), solid songwriting, vital brass sections, velvet vocals and impressive whistle notes, Solange certainly redefines the soul/r'n'b genre with a unique sound. She also did it with True, but this time is stronger, more efficient and sophisticated.

You cannot skip tracks or interludes, while listening to ASATT. This album demonstrates such an ethereal beauty that makes it so difficult not to be part of its magic. Even though Solange controls every minute of the hearing, A Seat At The Table is somehow self-existent. It feels like it had already been recorded somewhere in the universe and it patiently waited for the right woman to sing it away.