Erykah Badu - But You Cain't Use My Phone [Mixtape] 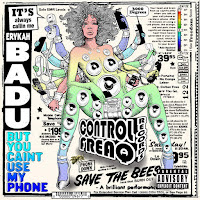 The Queen is back. I'm not writing this stuff as her true fan, but as a music fan. She has always been a pioneer, an art lover, a wise creator. She started her career back in 1997 with the best neo-soul album of all time, "Baduizm", while she has only recorded another 4 studio albums since then. But the thing is, you cannot be impatient if you want to enjoy a Badu project. Cause a Badu project is a grower. Like the perfect penis.

"But You Cain't Use My Phone" describes her urgent need to enjoy life in the absolute digital era. She samples favorite songs by Usher, Egyptian Lover, Isley Brothers, New Edition and Drake, she produces fresh and futuristic rhythm sections with Zach Witness in just 12 days and she delivers a modern hip-pop classic. But with a fun twist - shaken, not stirred.

Personally, I agree. She can make me put my phone down so that we can cruise through the city all day and all night, but her vocals are so sick 'n' tired, that she actually believes it's not possible for a human being to be totally disconnected and happy at the same time. Even when she playfully sings "U don't have to call" accompanied by old-school production, she knows that she does not mean this. Well, what kind of person calls her boyfriend "squirrel" and yet she wants to be alone tonight?

Anyone can expect that an Erykah Badu mixtape should be something about wise words, heavy basslines, jazzy vocals and provocative videos like "Window Seat", "On & On" or even "Honey". Let's just say that you cannot put a label on a true artist, cause her body will reject it like a fake transplant. You can easily spot the fun factor here, but you can also spot her struggle to survive as a 44-year-old musician in a touch screen world.

Erykah Badu runs this Mixtape with swagger and wittiness, along with her friends Andre 3000 and Drake. She has been the jazz-soul new artist during the late 90's, the New AmErykah creator in the 00's, the sweet-Love-Of-My-Life sugababe now and then, while she currently redefines herself as a devoted hip-hop performer. It's really weird that Adele and Erykah Badu share the same passion these days about their smartphones, but it's actually cute that pop culture has a common sense of humour, even though it's musically expressed through different paths.