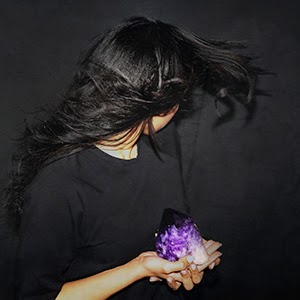 In a world where sophisticated r'n'b (or alternative r'n'b or however you want to call this) has done some serious damage in the pop charts (and awards shows), Tinashe has finally found the perfect timing to make a statement and produce music. After the release of her debut and my personal best for 2014, Aquarius, she just gave us for free her fourth mixtape (the first after her debut album), which she recorded in her childhood bedroom over Christmas vacation. She tweeted that it's a gift to her fans and, well... "you can count me in, girl".

In "Amethyst", she is more mellow and laid down than before. Her sound here is not about the charts the way "Aquarius" was. She sounds like an indie artist you just discovered on SoundCloud or an unsigned girl waiting to be huge someday. That makes this 7-track mixtape special. She is not waiting to release her sophomore project in two years or so. Instead, she keeps recording and sharing her music for free, simply because she seems not being able to survive without creating.

Her aquatic sound is always present in tracks like "Worth it", where retro synth pads blend with a solo sax and rap/sung vocals by herself and Iamsu!, who also has produced the track. In "Something to feel" and "Dreams are real" she reminds us the reasons why we have loved her sensual debut that much, while the Ritz Reynolds produced "Just the way I like you" is probably her most experimental track to date. But still, all of the songs are about one sound, one vision, one person.

As I have mentioned in the past, Tinashe is a pure talent. She is a music geek. She is constantly producing her own songs on her laptop and you can always find her using her SoundCloud account, listening to artists from all over the world. I mean, she went to see her parents for Christmas and she recorded seven tracks, c'mon.